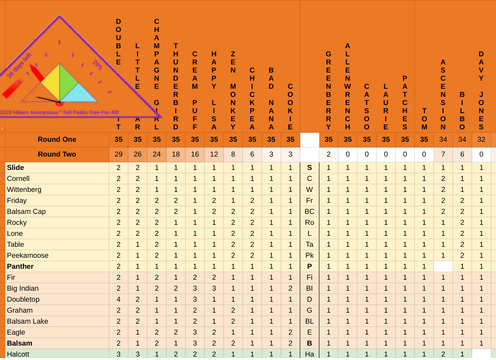 Use the Progress Form to submit your peaks. The Hikers Anonymous™ system will keep track of your progress and our innovative reports will keep you on target. 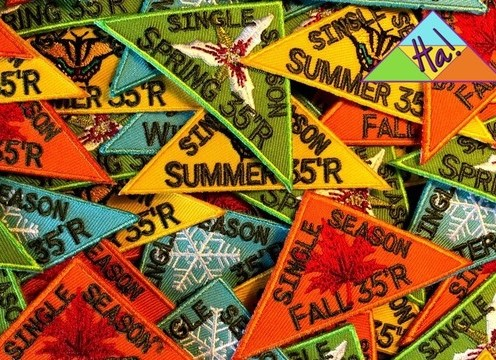 Climb the 35 Catskill High Peaks in a single season and earn a triangular embroidered patch. There's one for each season. Who's doing it? 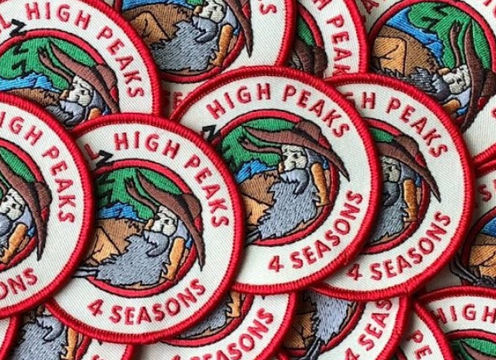 Climb the 35 Catskill High Peaks in each of the 4 seasons. Take as long as you like. Who's done it? 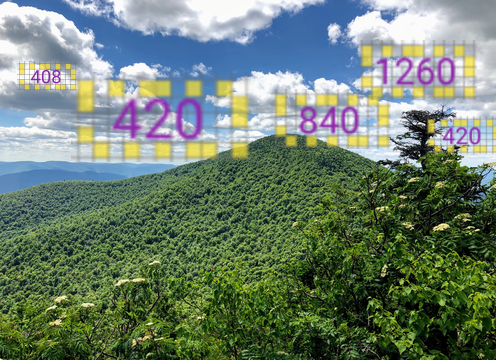 It was 1980 when Sam Steen and Richard Davis reached their goal. It was covered in the news and reported in the Canister. Who's done it since?

What an amazing winter season we had, with over 40 Single Season Winter 35'Rs, 15 of them on our newest peak Roundtop or its sibling Kaaterskill High Peak. The Field Agents of our Summit Parcel Post delivered envelopes to many finishers on the peak this season.

We are so excited to leave the confusion of 2020 behind and move forward with 35 Catskill High Peaks on public land!

Hike safe and smart with an early start. Stand together by staying apart.

Congratulations to our Winter 2021 FOUR in a Row finisher and good luck to hikers with an active streak!

Record Your Peaks, Track Your Progress, and Happy Hiking!

Doubletop, the highest elevation trailless peak in the Catskills, remains on the list with an adjustment to the summit location as described below.

Roundtop, the sibling of Kaaterskill High Peak in the Kaaterskill Wild Forest, replaces Graham, which is no longer accessible to hikers. 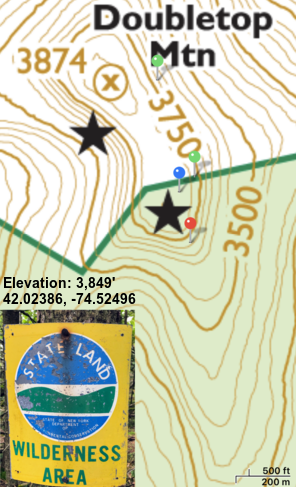 Hikers are fortunate that Doubletop can be climbed from multiple approaches entirely on State Land with a small adjustment to the agreed upon location which represents the summit destination. The Catskill 3500 Club canister has been removed from its location near the actual summit (3,874') which is inaccessible on private land. Don't go there anymore as you are no longer welcome. Instead, hike to the south top (blue pin) of Doubletop where you'll find a State Land Wilderness Area sign at 42.02386, -74.52496, elevation 3,849'.

Additionally, as we update our various tally cards, sheets, forms and reports, we will continue to use Doubletop as the name of the peak. We see no reason to make up a new name for a slightly different location on the summit of a well known Catskill High Peak.

If you are interested in exploring this further, visiting the Doubletop page on peakbagger.com is a fine starting point. 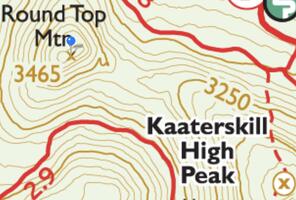 The Catskill 100 Highest Peak List in Via's book which lists the 102 highest peaks in the Catskills was used to identify the ten highest candidate peaks for consideration as a replacement for Graham. The Catskill 67 was published in 2012 before more accurate LIDAR based contours and summit elevations were available. The 2018 New York-New Jersey Trail Conference Catskill Trails Map, which contains the most accurate LIDAR based contours and summit elevations, was used to rerank the candidate peaks by elevation. The result is shown in the following table.

In addition to Roundtop being at the top of the list in terms of elevation, there are many additional reasons why we think it is the most worthy peak to replace Graham.

Here's a small excerpt from Alan Via's book, The Catskill 67, describing the wonders of Roundtop.

Unlike most of the trailless Catskill 100 peaks, Roundtop has a large rock cairn marking the obvious top. When the leaves are on the trees the views are mostly of the here-and-there variety; go from late autumn untile early spring for the best ones. Otherwise, look for the beautiful, grassy view point a couple of minutes from the summit. You won't be disappointed by the great views of the surrounding mountains. During the winter a few of the cliff bands are a bit more challenging, but the continual views through openings in the trees make the extra effort worth it.

Roundtop is accessible from multiple trailheads: Platte Clove, Gillespie Road and Palenville. It can be bushwhacked from all four compass directions. Myriad possibilites exist for an enriching hiking experience whether hiking Roundtop alone or with its sibling to the east, Kaaterskill High Peak. If you're looking for a challenging marathon hike, you could try the Kaaterskill Horseshoe, a six peak horseshoe shaped traverse around the peaks of Elka Park and Platte Clove, requiring only a short car shuttle.

The history associated with Roundtop and Kaaterskill High Peak is extensive. Thomas Cole of Catskill, NY found Kaaterskill High Peak and Roundtop to be worthy subjects of his Hudson River School paintings. These peaks were considered the tallest in the Catskills and were frequently visited and marvelled at during the era of the big hotels: the Catskill Mountain House, Hotel Kaaterskill and Laurel House. Look up the history of military usage of the area and search for the remains of the Tory Fort.

If you are interested in exploring Roundtop further, visiting the Roundtop page on peakbagger.com is a fine starting point. You'll find plenty of suggestions for great hike itineraries in the area at the Catskill Mountaineer website.

Hikers are no longer welcome on the 5,457 acre parcel owned by Gould Properties LLLP which includes the entire summit of Graham Mountain and a portion of the summit of Doubletop Mountain.

These requirements apply to all milestones and patches offered and recognized by Hikers Anonymous™.

The Catskill Single Season 35'R patches are a series of four 3” by 1.5” triangular embroidered patches designed and produced by the Hikers Anonymous™ Arts and Crafts Department.

Hiker has climbed each of the 35 Catskill High Peaks in a single season.

The climbs have to be completed in a single season.

You can receive these patches for single season rounds completed in past years. In fact, we encourage you to do so!

Hikers earning multiple patches can arrange them in many creative ways, including a 3” square or a 6” x 3” pyramid.

Here's what you need to do:

Having trouble? Email us and we'll try to assist you through the process.

The Catskill High Peaks 4 Seasons patch is a 3” circular embroidered patch designed and produced by the Hikers Anonymous™ Arts and Crafts Department. We have been offering this patch to Catskill High Peaks hikers since 2017, no club membership required.

The climbs do not have to be completed in the same year or consecutive years. There is no time limit.

Here's what you need to do:

Having trouble? Email us and we'll try to assist you through the process.

History of the Catskill 420 Grid 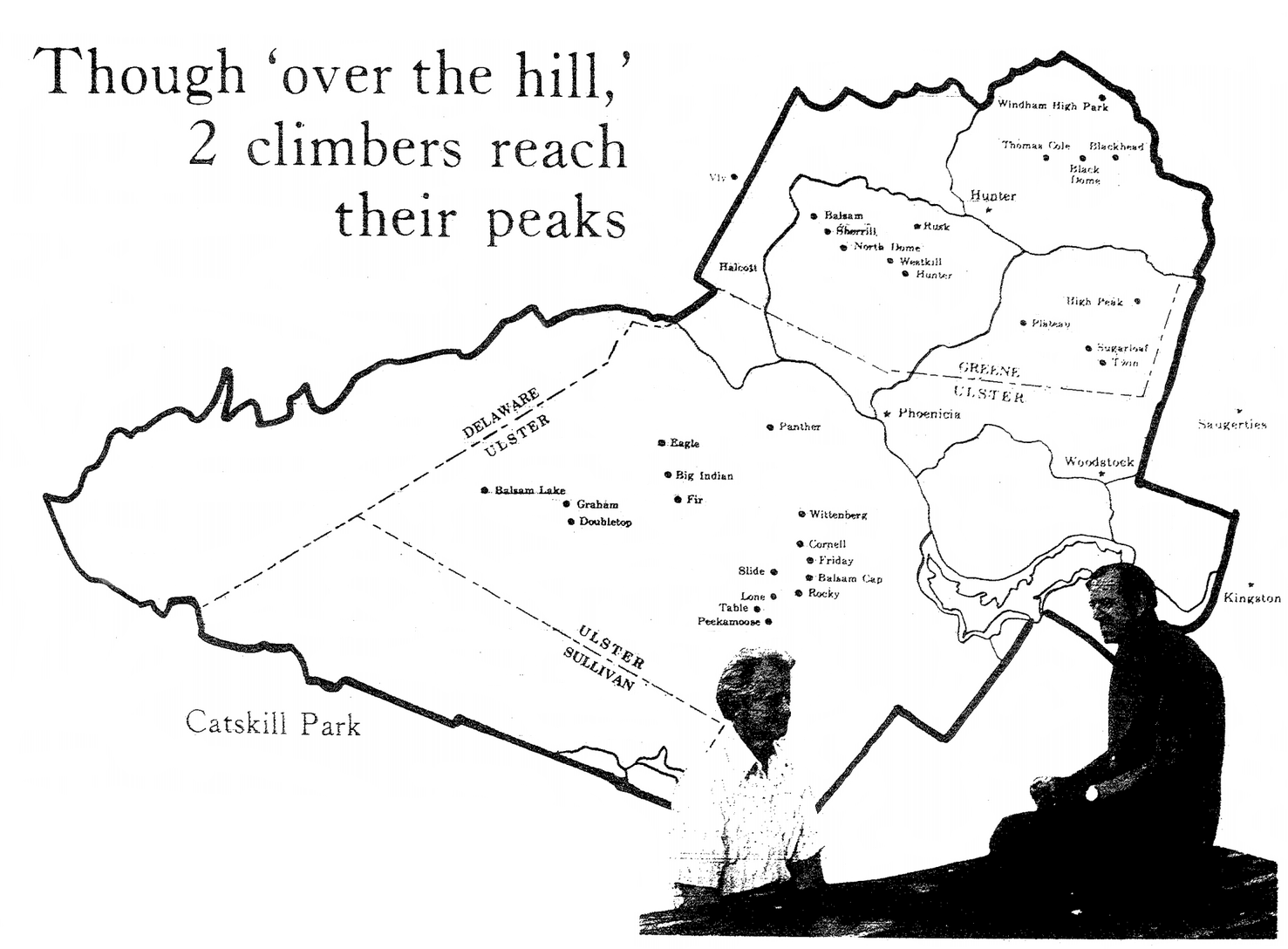 As described in an article written by Edwina Henderson and appearing on page 23 of the June 1, 1980 issue of the Sunday Freeman, Richard Davis and Sam Steen set out to climb each of the mountains required for membership in the Catskill 3500 Club in each month of the year. At that time, there were 34 such mountains, and thus, they made 408 ascents to accomplish their goal. Also accomplishing this feat were Joan Dean, Angie Mahdavian, and Bill Riemvis. The order of their completion is not definitively known.

Additional information about the first known completion of the Catskill 408 Grid including a letter from Sam Steen and a mention in the THE PERIPATETIC PORCUPINE can be found in the Catskill 3500 Club Canister, Volume 13 (1980) from the Canister Archive. As stated in Sam's letter, "The final climb was witnessed by Bill Riemvis and Friedel Schunk; two stout-hearted observers who pretend to have no such aspirations for themselves", but as you can see from the list below, at least one of those observers, Bill Riemvis, seems to have changed his mind at some point.

We strive to maintain the most complete, acurate and timely listing of Catskill 420 Gridders. If you have any additions or corrections, please let us know.